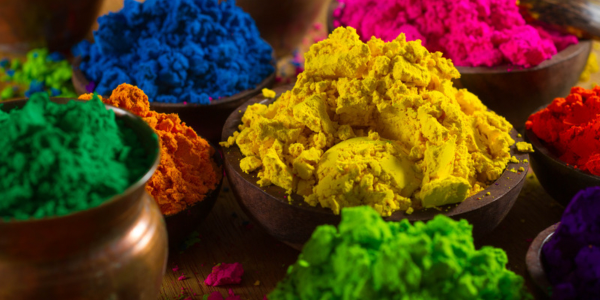 Part II: The History Behind the Colors

Colors used in dyes were originally derived from a wide variety of different sources, such as charcoal, berries, plants, animal, fat and other sources. Today, they are mostly made from synthetic chemicals. Let’s take a look at some of the different colors that have been used heavily throughout history in art and sewing and some of the artists that have used them over the years.

Red first appeared in prehistoric cave paintings, and was derived from iron-rich soil and rocks. During the 1500s and 1600s, red pigment came from an insect called the cochineal. This type of insect is only found in the American Southwest and in Mexico, particularly on cacti. These insects were the source of a potent red dye. Among gold and silver, it was one of the greatest exports out of the New World. Some of the artists that used this particular red pigment in their paintings include Raphael, Rembrandt, and Ruebens.

Blue historically comes from a wide variety of different plants and minerals. For example, ultramarine blue was originally made from minerals such as lapis lazuli, cobalt, and azurite. Other types of blue pigments come from plants in India. In fact, the indigo color that we are familiar with was once known as India’s “blue gold.” Supermarine blue and other colors are historically very important to artists, such as Vermeer’s Girl With a Pearl Earring from 1665. Blue is a color that helps add multiple dimensions to paintings, quilts, and other artwork.

Yellow was largely unused historically with few exceptions. An artist by the name of Joseph Mallord William Turner experimented with yellow from the urine of mango-fed cows. Van Gough used chromium and cadmium to generate the yellows that were needed for his paintings such as Irises.

Green is traditionally a color that is associated with nature, spring, and the outdoors. However, the original dyes and pigments made from green were not as “lively.” In fact, a Swedish chemist named Scheele invented a hue of green that was based off of arsenic as a main ingredient. Artists such as Monét, Cézanne, and Renoir had a variation of green that used copper and arsenic to create the emerald color used in many of their paintings. At the end of the day, in the 1960s, harmful chemicals used to create colors and dyes were banned in most countries.

Purple is a color that is rich in history and at one point, the Phoenicians were the center of making purple pigments. They originally derived purple dye and colors from a species of sea snail called the Bolinus brandaris. Purple was originally a very rare color and was worth its weight in gold. Monét and other French impressionist painters used purple extensively in their artworks. Sources that produce purple are very rare in nature.

Early European painters from the medieval and renaissance periods used bones burned in an air-free chamber to come up with black. Impressionists avoided the use of black in their paintings, but many painters in the 20th century, such as Frank Stella, used black as a cornerstone of their paintings.

White originally came from materials such as chalk or lime. However, lead white became a popular color. Some Dutch painters mixed lead and vinegar with animal droppings and after three months, a white flaky substance formed. Artists that used white in their works include Kazimir Malevich, Lee Ufan, Frank Auerbach, and others.

Today, most fabrics are dyed in a manner that uses chemicals that are harmless. Many of the colors that we prefer to use in our quilts once were not readily available to fabric artists historically. As colors have become more commercially available, they appear more frequently in our quilts.