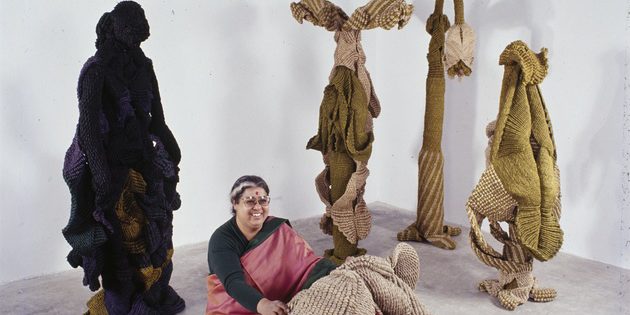 Mrinalini Mukherjee was an Indian sculptor. Known for her distinctly contemporary style and use of dyed and woven hemp fibre, an unconventional material for sculpting, she had a career spawning over four decades from the 1970s to the 2000s. Mukherjee’s body of work is a part of public collections at, among others, the Museum of Modern Art, Oxford, the National Gallery of Modern Art, New Delhi, and the Stedelijk Museum, Amsterdam.

Trained as a painter

Mukherjee turned to natural fibers such as jute and hemp in the early 1970s, while studying at the Maharaja Sayajirao University of Baroda, one of India’s most important art schools. The curriculum drew on the principles of the German Bauhaus art school, which unified art, craft, and design, and encouraged students to look to traditional idioms, indigenous materials, and historical genres to define a genuinely new Indian art. Through a practice that unabashedly merged art and craft, Mukherjee upended the decorative associations of her chosen medium, finding a set of radical possibilities for contemporary sculpture.
In 1978, Mukherjee travelled on a British Council Scholarship for Sculpture to study at the West Surrey College of Art and Design for a year. Throughout the early 1970s, Mukherjee had established a practice of creating fibre sculptures in New Delhi, which began gaining critical attention, leading to her first solo exhibition at Shridharani Art Gallery in 1972.

Mukherjee’s fibre sculptures, which began as wall-based works, consist of densely knotted hemp or jute ropes that are defined by bright colouration. Often drawing their names from Hindu mythology, such as Nag Devta (1979) and Black Devi (1980), they stem from the vernacular statues of deities and spirits that she encountered in local temples and shrines throughout India. Abstracted yet anthropomorphic.
Two days before her retrospective opened at the National Gallery of Modern Art in Delhi in February 2015, Mukherjee was hospitalised. A week later, she died, aged 66, due to lung complications.