Characteristics of a Modern Quilt

You are here:
Modern quilting 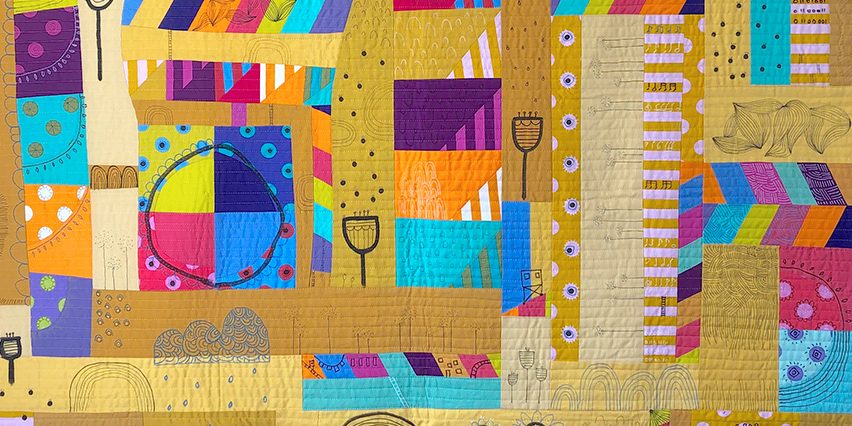 People have been making quilts since at least the 13th century. Kings and queens often listed these heirlooms as important pieces in their inventory. While making quilts almost became obsolete in America as people purchased bedcovers in stores, the modern quilt movement was born in America starting in about 1998.

What Is the History of Modern Quilt Movement?

One of the earliest driving forces behind the Modern Quilt Movement occurred in 1998 when Martha Stewart Living Magazine featured Denyse Schmidt’s quilts.

Four different factors helped to encourage sewers to embrace the movement quickly. Many were connecting with others on different social media. Since almost everyone could afford a good quality digital camera, sewers could share their creations with the general public, who eagerly embraced their bold ideas. The fabric industry was quick to offer quality fabrics in precut shapes, and the public snatched these pieces off the shelves to make their creations.

The movement may have been very short-lived, except that the Museum of Fine Arts Houston put together their Quilts of Gee’s Bend. The quilts of Gee’s Bend are quilts created by a group of women and their ancestors who live or have lived in the isolated African-American hamlet of Gee’s Bend, Alabama along the Alabama River, those quilts were acclaimed by notable journalists, like Michael Kimmelman of The New York Times as being “some of the most miraculous works of art America has produced.”

While many of the quilts used traditional patterns that the women had learned from their mothers and grandmothers, their use of color was very innovative. They often made them from worn-out work clothing as these women lived in one of the country’s poorest counties.

As the quilts moved across the country, more people discovered that they loved the modern quilt’s look and wanted to create their own.

What Are Common Characteristics of the Modern Quilt Movement?

There are at least five characteristics seen in quilts created during the Modern Quilting Movement: • Use of Bold Colors and Prints• High Contrast Between Graphic Areas and Solid Colors with frequent use of grey or white as the background color• Free or Liberated Piecing• Minimalistic Design• Large Areas of Negative Space• Updated Classic Quilt Blocks• Infrequent use of borders• Multiple fabric-pieced backings• Use of different types of fabric within the same quilt

A Deeper Dive into Some Modern Quilt Ideas

If you have been making traditional quilts, you need to rethink some of your concepts before joining the modern quilting movement.

Design with Negative Space in Mind

When compared to traditional quilts, a design element in modern quilts is the use of negative space. You can use it for several purposes, including: • Define shapes• Create movement• Add emphasis• Create interest• Unclutter complicated designs• Give a minimalistic vibe

Alternate gridwork is simply designing your quilt in an unexpected way. For example, your quilt might follow a 3X3 grid, but it might be slightly off-center, or there may be no visible grid used at all. There are several tricks that you can use to create your alternate gridwork, including: • Relying on the rule of thirds by placing your main design elements on one of the intersecting lines• Leaving negative space down the middle of your design• Enlarging a traditional quilt block design to cover the entire quilt• Creating a pieced background• Placing all the blocks at the top or bottom of the quilt• Cut traditional blocks in half or quarters and add strips to make larger blocks

We can think about Improvisation as creating a quilt without following any pattern, without a cutting list. Cutting with a ruler is optional! The traditional building rules (use, straight lines, grid) are put aside to create in a free, more organic and intuitive way.

One of the most intimidating parts of creating a modern quilt for many quilters is deciding on the quilting design they want to use. Craftspeople can choose from several different options or choose to create their own. Possible options include: • Stitching in the ditch- Stitch around the pieces of your quilt design• Simple overall design – If the quilt is busy, choosing a simple overall design can keep it from getting even more complicated.• Add emphasis – Choose to add a specific quilting pattern to areas of the quilt to add emphasis. You may also want to consider changing colors or types of thread.• Matchstick Quilting are lines 1/4 or 1/8 inches apart. You can use the same pattern for the entire quilt or choose to put these lines in specific spots to draw attention to design elements.

Do not let the process of creating your modern quilt intimidate you, here on my website You can find online quilting classes to help you to sew new shapes, playing with color and to improvise in your quilt making .